Adam and Eve “knew each other”, or in other words they were no longer innocent as children, and because of that… they were able to conceive a child, and they conceived Cain. They also had Abel who was Cain’s brother.

Cain gets upset with his brother Abel and kills him in the field. The Lord asks Cain where his brother is, and Cain essentially denies that he did anything.

The Lord curses Cain and sets a mark upon him, so that people will know that it is him. Cain is banished to the land of Nod, which is east of Eden. There, Cain conceives many children with his wife. Their first child was Enoch and after him did they name the city they started in the land of Nod.

Adam and Eve have another child named Seth to replace the loss of their son Abel. Seth has a son and calls his name Enos, and from that day forward men look unto God.

Chapter 5: The Generation of Adam

Chapter 6: Noah and the Ark

“And it came to pass, when men began to multiply on the face of the earth, the daughters were born unto them, That the sons of God saw that the daughters of men that they were fair…” (Genesis 5:1-2)

I get out of this scripture that it is NATURAL for a MAN to like a WOMAN and VICE-VERSA. No where do I see that it says “the sons of God saw the sons of men that they were fair”, God did not make men or women to be gay. That is not love, it is simply lust.

But, just like in today’s time we see wickedness… God was upset to the point where he said he wished he hadn’t made man on the earth. God was saddened by the wickedness of men! Therefore he decided to destroy mankind and their wickedness by using the earth to flood the earth.

“And God said unto Noah, The end of all flesh is come before me; for the earth is filled with  violence through them, and, behold I will destroy them with the earth. Make thee an ark of gopher wood; rooms shalt thou make in the ark, and shalt pitch it within and without with pitch. And this is the fashion which thou shalt make it of: The length of the ark shall be three hundred cubits, the breadth of it fifty cubits, and the height of it thirty cubits. A window thou shalt make to the ark, and in a cubit shalt thou finish it above; and the door of the ark shalt thou set in the side thereof; with lover, second and third stories shalt thou make it.” (Genesis 6:13-17)

The Ark had 1 Single Window. 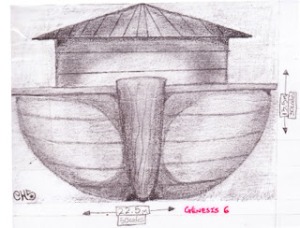 God tells Noah that he is going to flood the earth and that it will be his responsibility to save mankind and all life on earth through him building an ark, stocking it with animals and food and surviving through the flood.