Noah is commanded by God to bring with him in the Ark seven of each clean animal, male and female and 2 of every other animal that is unclean; male and female. We can find a list of clean and unclean animals in Leviticus 11.

God tells Noah that he will cause it to rain upon the earth for forty days and forty nights. Noah was 600 years old when the earth was flooded.

With the Ark built, and the animals loaded… and 125 years of preparation…  they were ready for the floods to come from the“…fountains of the great deep…” and from the “…windows of heaven…” (Genesis 7:11)

The waters covered the entire earth, even the highest mountains in the world were covered by at least 22.5 feet of water (or 15 cubits). It rained for 40 days and 40 nights, and the waters prevailed on the earth for 150 days.

One cool thing that you can find throughout the scriptures (Shakespear, Bible, Book of Mormon) is Chiasmus:

“The figure of speech in which two or more clauses are related to each other through a reversal of structures in order to make a larger point; that is, the clauses display inverted parallelism. Chiasmus was particularly popular both in Greek and in Latin literature, where it was used to articulate balance or order within a text. As a popular example, many long and complex chiasmi have been found in Shakespeare and the Greek and Hebrew texts of the Bible. It is also used various times in the Book of Mormon.” 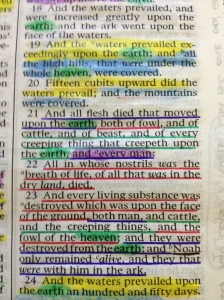 his is from my scriptures, notice that the words underlined in blue, red and green speak of the same thing.

Chapter 8: The Flood is over

The waters from the great deep and the rain from the heavens completely stops and the water starts to “drain”. The Ark is stopped by the top of the mountains of Ararat.

Noah decides to send out a raven and a dove to check for dry ground. Noah and his family wait patiently in the Ark until the dove brings back an Olive Leaf, which lets him know that the waters were completely removed from the face of the earth and dry ground did exist.

God commands Noah and his family to exit the Ark and multiply and replenish the earth. Noah, to offer thanks takes some of the clean animals (how many? we don’t know) and makes sacrifices of them before the Lord. Remember how 7 of each clean animal was saved for the Ark? Now we know why.

God responded to Noah’s sacrifice by saying: “…I will not again curse the ground any more for man’s sake; … neither will I smite any more every thing living, as I have done” (Genesis 8:21)

Chapter 9: Multiply and Replenish the Earth

God commands Noah and his children to be fruitful and multiply the earth. God tells them that they should not shed the blood of man.  God promises to never flood the earth again, this promise is given to us almost every time it rains… the RAINBOW. (Genesis 9:11-13)