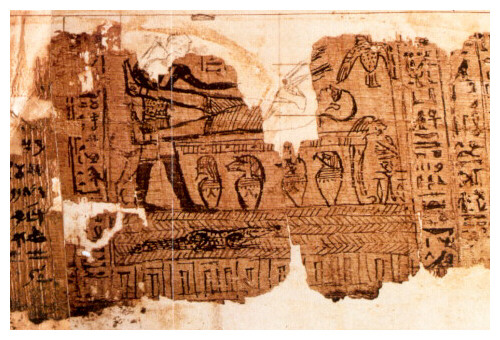 The book of Abraham is a translation of ancient records written on papyrus that came into the possession of the Church in 1835. The records were translated by Joseph Smith through revelation. This book contains truths about the premortal Council in Heaven, the creation of the earth, the nature of God, and the priesthood.

In Chapters 1-2: We learn more about Abraham and his family life and how he came to be part of the Abrahamic Covenant that he made with God. We learn about how the gospel had been lost and how the ancient Egyptians had fallen into idolatry.  Abraham is given a promise; The Abrahamic Covenant (see also: Genesis 17); “…I give unto thee a promise that this right [the priesthood] shall continue in thee…shall all the families of the earth be blessed, even with the blessings of the Gospel, which are the blessings of salvation, even of eternal life.” (Abraham 2:11)

In Chapter 3: We learn about the stars and the heavens. We learn that God lives near a star named Kolob. The Lord continues to speak with Abraham and shows him all of His great works, he explained; “…This is Shinehah, which is the sun… Kokob, which is start…Olea, which is the moon… Kokaubeam, which signifies stars, or all the great lights, which were in the firmament of heaven.(Abraham 3:13) The Lord also shows Abraham the intelligences that formed the earth from the foundation thereof. God tells Abraham that; “…thou wast chosen before thou wast born…” (Abraham 3:23)

In Chapters 4-5:  We learn about the Creation and how the world was planned spiritually before it was constructed physically. We learn that it was the council of Gods who did this with God the Eternal Father overseeing His creative plans. “…the Lord said: Let us go down. And they went down at the beginning, and they, that is the Gods, organized and formed the heavens and the earth.” (Abraham 4:1) Abraham gives us information that we did not have from Genesis, that “Gods” created the world. This in no way takes away from the importance of the one and only God the Father. Rather, from this we learn that God the Father has other God’s who work underneath His creative masterpieces