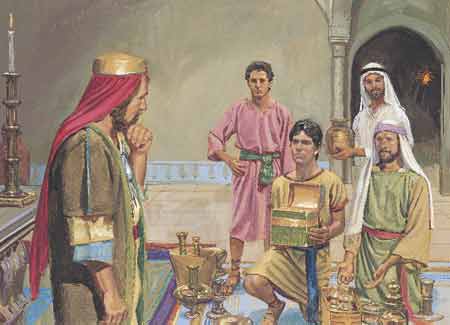 Nephi comes out from his tent, after having spoken with God… he explains that he has ‘dreamed a dream’ in which him and his brothers are to return to Jerusalem to obtain Brass Plates from a man named Laban; “…Laban hath the record of the Jews and also a genealogy of my forefathers, and they are engraven upon plates of brass.” (1 Nephi 3:3) Nephi’s brothers murmur and tell Nephi that he asks too much of them. However, Nephi explains that it is not his command, but the commandment of God for them to retrieve these Brass Plates.

Nephi speaks to his father; “…I will go and do the things which the Lord hath commanded, for I know that the Lord giveth no commandments unto the children of men, save he shall prepare a way for them that they may accomplish the thing which he commandeth them.” (1 Nephi 3:7) Lehi, after having heard these words was filled with joy… because he knew that Nephi had been commanded of God to do these things, and he felt blessed. Nephi showed great character and faith in following the commandments of God no matter how difficult. This example can be used for all!

Nephi and His brothers Travel to Jerusalem

Nephi and his brothers pack up their tents and head back towards Jerusalem, and while journeying they cast lots to see who would go into the house of Laban to retrieve the Brass Plates. The Lot is cast upon Laman. Laman enters the house of Laban and requests the Brass Plates, however Laban is angered; “…Laban was angry, and thrust him out from his presence; and he would not that he should have the records. Wherefore, he said unto him: Behold thou art a robber, and I will slay thee.” (1 Nephi 3:13)

Laman was able to flee from his presences and return to his brethren outside of the house. Nephi’s brothers are determined to flee Jerusalem; however Nephi reminds them that God had commanded them to obtain the records. Nephi speaks to his brothers; “…As the Lord liveth, and as we live, we will not go down unto our father in the wilderness until we have accomplished the thing which the Lord hath commanded us. Wherefore, let us be faithful in keeping the commandments of the Lord; therefore let us go down to the land of our father’s inheritance, for behold he left gold and silver, and all manner of riches. And all this he hath done because of the commandments of the Lord.” (1 Nephi 3:15-16) Nephi reminds them that with God, all is possible. Nephi derives a plan to return to the house of their father to take their inheritance (gold and silver) to please Laban and essentially buy the plates from him. Nephi explains to his brothers that after Jerusalem is destroyed, it would be up to them to preserve the record of their children.

Nephi and his brothers retrieve their inheritances and return to speak with Laban. This time Laban became greedy and desired both the Brass Plates and the precious metals; “…when Laban saw our property, and that it was exceedingly great, he did lust after it, insomuch that he thrust us out, and sent his servants to slay us, that he might obtain our property.” (1 Nephi 3:25) Nephi and his brothers AGAIN flee from the house of Laban. Because they were faithful, the Lord did protect them and the servants of Laban were unsuccessful of overtaking them in the wilderness and destroying them.

After two unsuccessful attempts, Laman and Lemuel became angered and they spoke hard words and beat both Nephi and Sam with rods. As they were being beaten by their brothers; “…an angel of the Lord came and stood before them, and he spake unto them, saying: Why do ye smite your younger brother with a rod? Know ye not that the Lord hath chosen him to be a ruler over you, and this because of your iniquities? Behold ye shall go up to Jerusalem again, and the Lord will deliver Laban into your hands.” (1 Nephi 3:29)

Even after having seen an angel of the Lord, both Laman and Lemuel began to murmur again saying; “…How is it possible that the Lord will deliver Laban into our hands? Behold, he is a mighty man, and he can command fifty, yea, even he can slay fifty; then why not us?” (1 Nephi 3:31) Both Laman and Lemuel had yet to come to believe in the Lord and His great power!