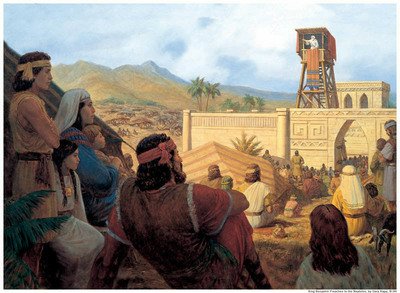 Chapters 2-5 encompasses the speech given by King Benjamin to his people.

Mosiah sends a message throughout the land to all the people to gather near the temple to hear the words of King Benjamin. The people also brought “…the firstlings of their flocks, that they might offer sacrifice and burnt offerings according to the law of Moses.” (Mosiah 2:3)

“…the multitude being so great that King Benjamin could not teach then all within the walls of the temple, therefore he caused a tower to be erected, that thereby his people might hear the words which he should speak unto them.” (Mosiah 2:7)

After the tower was erected, King Benjamin began to speak to the people, however because the multitude of the people was so great, not everyone could hear his words. So, King Benjamin ordered that his words being written down and spread to those who were not in the sound of his voice.