After seeing the Angel, Nephi speaks to Laman and Lemuel and explains that the Lord is all powerful “…for behold he is mightier than all the earth, then why not mightier than Laban and his fifty, yea, or even than his tens of thousands? Therefore let us go up; let us be strong like unto Moses; for he truly spake unto the waters of the Red Sea and they divided hither and thither, and our fathers came through, out of captivity, on dry ground, and the armies of Pharaoh did follow and were drowned in the waters of the Red Sea.” (1 Nephi 4:1-2)

Nephi tells Laman and Lemuel that they both know he is right and they cannot deny. Laman and Lemuel continue to murmur, but still follow Nephi back to Jerusalem to obtain the Brass Plates. Nephi commands his brothers to hide themselves; “… after they had hid themselves, I, Nephi, crept into the city and went forth towards the house of Laban. And I was led by the Spirit, not knowing beforehand the things which I should do. Nevertheless I went forth, and as I came near unto the house of Laban I beheld a man, and he had fallen to the earth before me, for he was drunken with wine. And when I came to him I found that it was Laban.” (1 Nephi 4:5-8) 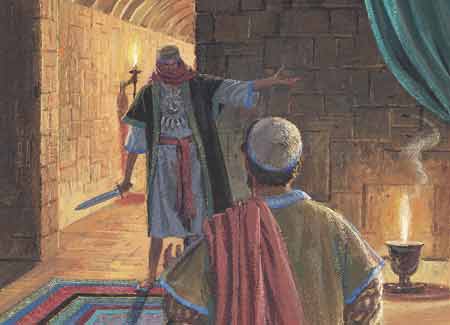 Nephi, now dressed in the clothes of Laban goes towards the treasury to retrieve the Brass Plates when he runs into one of the servants of Laban, who had the keys to the treasury. Nephi; “…commanded him in the voice of Laban, that he should go with [Nephi]  into the treasury.” (1 Nephi 4:20) Laban’s servant thought it was his master speaking and therefore opened the treasury. Nephi tells the servant to grab the Brass Plates and commands him to follow him to the outside gates of the house. The servant agrees and flees with ‘Laban’ aka Nephi to meet Nephi’s brothers.

When he approached the outside walls, Laman and Lemuel were exceedingly frightened; “…for they supposed it was Laban, and that he had slain me and had sought to take away their lives also. And it came to pass that I called after them, and they did hear me; wherefore they did cease to flee from my presence.” (1 Nephi 4:28-29) Laban’s servant tries to flee, but Nephi being large in stature holds him and prevents him from running.

Nephi speaks to the servant of Laban [named Zoram] and tells him that if he follows them and makes an oath with them that he would be a free man; “…Zoram had made an oath unto us, our fears did cease concerning him… it came to pass that we took the plates of brass and the servant of Laban, and departed into the wilderness, and journeyed unto the tent of our father.” (1 Nephi 4:37-38)

Galatians 5: The Fruits of the Spirit

“STAND fast therefore in the liberty wherewith Christ hath made us free, and be not entangled again with the yoke of bondage.” (Galatians 5:1)

Paul makes a very bold statement in declaring that we are free in liberty when we follow the commandments of God. However, if we get entangled in the evils of the world we will be in bondage. Paul goes on to say that in the “…Spirit [we] wait for the hope of righteousness by faith.” (Galatians 5:5) We are not always going to have signs or wonders performed in front of our eyes for us to believe in Jesus Christ, or His doctrine and commandments. We walk by faith and by that faith we serve one another. “For all the law is fulfilled in one word, even this; Thou shalt love thy neighbour as thyself.” (Galatians 5:14)

Paul gives the Galatians a great piece of advice, which can be applied to everyone: “…Walk in the Spirit, and ye shall not fulfil the lust of the flesh.” (Galatians 5:16) Paul explains that lust pulls away from the Spirit, those who are led by the Spirit have no need for the law… because the Spirit will guide them in the ways of the law.

Paul explains the works of the flesh: “…Adultery, fornication, uncleanness, lasciviousness [lustful], Idolatry, witchcraft, hatred, variance [contention], emulations [rivalry, self-seeking], wrath, strife, seditions, heresies, Envyings, murders, drunkenness, revellings… they which do such things shall not inherit the kingdom of God.” (Galatians 5:19-21) Those who follow after the desires, and lusts of the world will not inherit the kingdom of God.

Paul goes onto explain that those who follow the Spirit will feel something different than those who are following after the flesh. For “…the fruit of the Spirit is love, joy, peace, longsuffering, gentleness, goodness, faith, Meekness, temperance; against such there is no law.” (Galatians 5:22-23)

Those who are filled with the Spirit and fight against the lusts of the world are filled with the joy of the Spirit. Those who rid themselves of those evils, have participated in their own crucifixion of the evil and have been Spiritually reborn and symbolically resurrected of their old ways. “…they that are Christ’s have crucified the flesh with the affections and lusts. If we live in the Spirit, let us also walk in the Spirit. Let us not be desirous of vain glory, provoking one another, envying one another.” (Galatians 5:24-26) Paul urges the Galatians (and the reader) to walk by the Spirit and love one another.