In this chapter, Paul writes a letter to the Hebrews and starts off by telling them who Melchisedec was. Melchisedec was the King of Salem; “…who met Abraham returning from the slaughter of the kings, and blessed him. To whom also Abraham gave a tenth part of all…” (Hebrews 7:1-2) This is very important to know, Abraham, who was counted by all as a very great man in the eyes of both God and men, was blessed by Melchisedec? Abraham also gave his tithes to Melchisedec, this would imply that Melchisedec was a very powerful and wise man in both the eyes of God and man.

Paul goes on to explain that Melchisedec was; “Without father, without mother, without descent, having neither beginning of days, nor end of life; but made like unto the Son of God; abideth a priest continually.” (Hebrews 7:3) Here we learn a lot about the character of Melchisedec, he had no parents, no ancestors and was made ‘like unto the Son of God’. If we were to take this scripture exactly as it is written, one could understand that Melchisedec was on the same level of Jesus Christ. However, more modern day revelation has revealed exactly what this scripture meant;

“This high priesthood [the priesthood that Melchisedec had] being after the order of his Son [Jesus Christ], which order was from the foundation of the world; or in other words, being without beginning of days or end of years, being prepared from eternity to all eternity, according to his foreknowledge of all things.” (The Book of Mormon; Alma 13:7)

The Book of Mormon, which was written in the Americas during the time of the Old and New Testament of the Bible, explain that Melchisedec himself was not without father or mother, nor was HE himself made like unto Jesus Christ. Rather, the priesthood which Melchisedec held was without years. This priesthood was made from the foundation of the world and was made after the order of Jesus Christ. While we do not know much about Melchisedec, it is likely that he did actually have family. While we do not know all the facts, one thing we do know is that Melchisedec held a priesthood which was of the highest order. In the Church of Jesus Christ of Latter-day Saints, through Jesus Christ we have been given this Priesthood Authority, which we call the “Melcizedek Priesthood” after the same order which Melchisadec belonged too.

Paul goes on to ask the Hebrews to consider; “…how great this man was, unto whom eve the patriarch Abraham gave the tenth of his spoils.” (Hebrews 7:4) At this time, under the sons of Levi was the Priesthood after the order of Aaron, known as the Aaronic Priesthood. This priesthood was considered at the time to be the highest order. However Paul explains; “…what further need was there that another priest should rise after the order of Melchisadec, and not be called after the order of Aaron?”  (Hebrews 7:11) Paul, like the Hebrews was probably confused by this, but Paul clarifies that this priesthood did not come from the tribe of Levi. Rather it is “…far more evident: for that after the similitude of Melchisedec there riseth another priest. Who is made, not after the law for a carnal commandment, but after the power of an endless life.” (Hebrews 7:15-16)

Paul explains that a High Priest; “…is holy, harmless, undefiled, separate from sinners, and made higher than the heavens.” (Hebrews 7:26)

Hebrews 6: Importance of the Priesthood

Paul continues to address the subject of Priesthood in this letter to the Hebrews; he starts out by urging the members of the Church to “…go on unto perfection; not laying again the foundation of repentance from dead works…” (Hebrews 6:1) In other words, we should move towards becoming perfect, this doesn’t mean that we are currently perfect. However, if we continue to sin (especially if it is the same sin) over and over again, and ask for repentance the same number of times… we are not moving towards perfection.

Paul explains that certain ordinances must be performed when God permits them to be performed; “…baptisms, and… laying on of hands… resurrection of the dead… this will we do, if God permits.” (Hebrews 6:2-3)

So a big question arises, how do we know when God permits? Looking back one chapter; we read that we cannot take upon ourselves “…this honour…  [except] …he that is called of God, as was Aaron.” (Hebrews 5:4) This is where having a modern day prophet on the earth is IMPORTANT. With the Authority restored on the earth, we can know God’s will today. We don’t have to rely on prophets of old to help us solve our problems of today. Therefore, proper Priesthood Authority is needed… a direct line back to Jesus Christ Himself MUST exist.

Assuming that someone has proper priesthood authority, doesn’t mean that they can’t lose that priesthood authority. Paul, addressing the Hebrews and most likely their concerns, explains the process for returning to full fellowship, with priesthood keys restored; “If they [priesthood holders] fall away, to renew them again unto repentance; seeing they crucify to themselves the Son of God afresh, and put him to an open shame.” (Hebrews 6:6) This means that if a priesthood bearer, fall away from the Gospel and His covenant at Baptism; he must repent, crucify themselves (spiritually) and be publicly dis-fellowshipped from the congregation. This means that they would not participate in the more sacred callings and privileges reserved for obedient members of the church. Until, a time when priesthood leaders through revelation, determine that the member be restored to full fellowship.

Paul explains that those who do fall away should not feel as if they have failed in the eyes of God; “For God is not unrighteous to forget your work and labour of love, which ye have shewed toward his name…” (Hebrews 6:10) If someone fails to live righteously, but earnestly seeks to do well… will be granted forgiveness, in that; “They be not slothful, but followers of them who through faith and patience inherit the promises.” (Hebrews 6:12) How marvelous is God, being merciful unto all men!

Paul explains that God made a promise to Abraham, and because God could swore to no one greater than He; “…he swear by himself, Saying, Surely blessing I will bless thee, and multiplying I will multiply thee.” (Hebrews 6:13-14) Abraham was given a promise, and the Lord made sure that if Abraham fulfilled his promise, God would swear by His promise. “And so, after he had patiently endured, he obtained the promise.” (Hebrews 6:15)

Paul mentions this to help us better understand that we have purpose in this life; “Which hope we have as an anchor of the soul, both sure and stedfast…” (Hebrews 6:19)

Hebrews 5: Importance of the Priesthood

Paul explains the importance of Priesthood, but most importantly he explains the importance of proper authority in the Priesthood. Paul explains; “…no man taketh this honour unto himself, but he that is called of God, as was Aaron.” (Hebrews 5:4) In other words, no one can claim to take upon themselves the Authority of the Priesthood, except they be called of God, like Aaron was called.

How was Aaron called of God? In Deuteronomy we learn how the Authority was transferred from Moses to Joshua upon the death of Moses; “…Joshua… was full of the spirit of wisdom; for Moses had laid his hands upon him…” (Deuteronomy 34:9) In the same manner, Aaron received the Priesthood from someone who had been called of God, through temple ordinances (see Exodus 40).

Paul explains that Christ was also given the Priesthood from God, and He gave the Priesthood to His Apostles; “…also Christ glorified not himself to be made an high priest; but he that said unto him, Thou arty my Son, to day have I begotten thee. As he saith also in another place, Thou art a priest for ever after the order of Melchisadec.” (Hebrews 5:6) 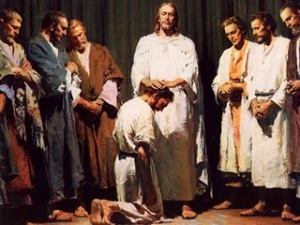 In Matthew, Christ called His Apostles and gave them the priesthood power; “… he had called unto him his twelve disciples, he gave them power…” (Matthew 10:1) This power was given by the laying on of hands. 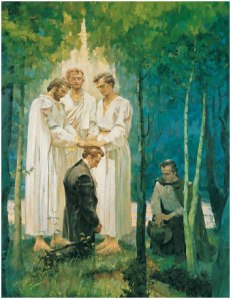 This same power and authority exists in The Church of Jesus Christ of Latter-day Saints, which was restored to the earth through Joseph Smith. In the Joseph Smith History it reads;

“We still continued the work of translation, when, in the ensuing month (May, 1829), we on a certain day went into the woods to pray and inquire of the Lord respecting baptism for the remission of sins, that we found mentioned in the translation of the plates. While we were thus employed, praying and calling upon the Lord, a messenger from heaven descended in a cloud of light, and having laid his hands upon us, he ordained us, saying: Upon you my fellow servants, in the name of Messiah, I confer the Priesthood of Aaron, which holds the keys of the ministering of angels, and of the gospel of repentance, and of baptism by immersion for the remission of sins; and this shall never be taken again from the earth until the sons of Levi do offer again an offering unto the Lord in righteousness. He said this Aaronic Priesthood had not the power of laying on hands for the gift of the Holy Ghost, but that this should be conferred on us hereafter [The Melchizadek Priesthood];” (Joseph Smith History 1:68-70)